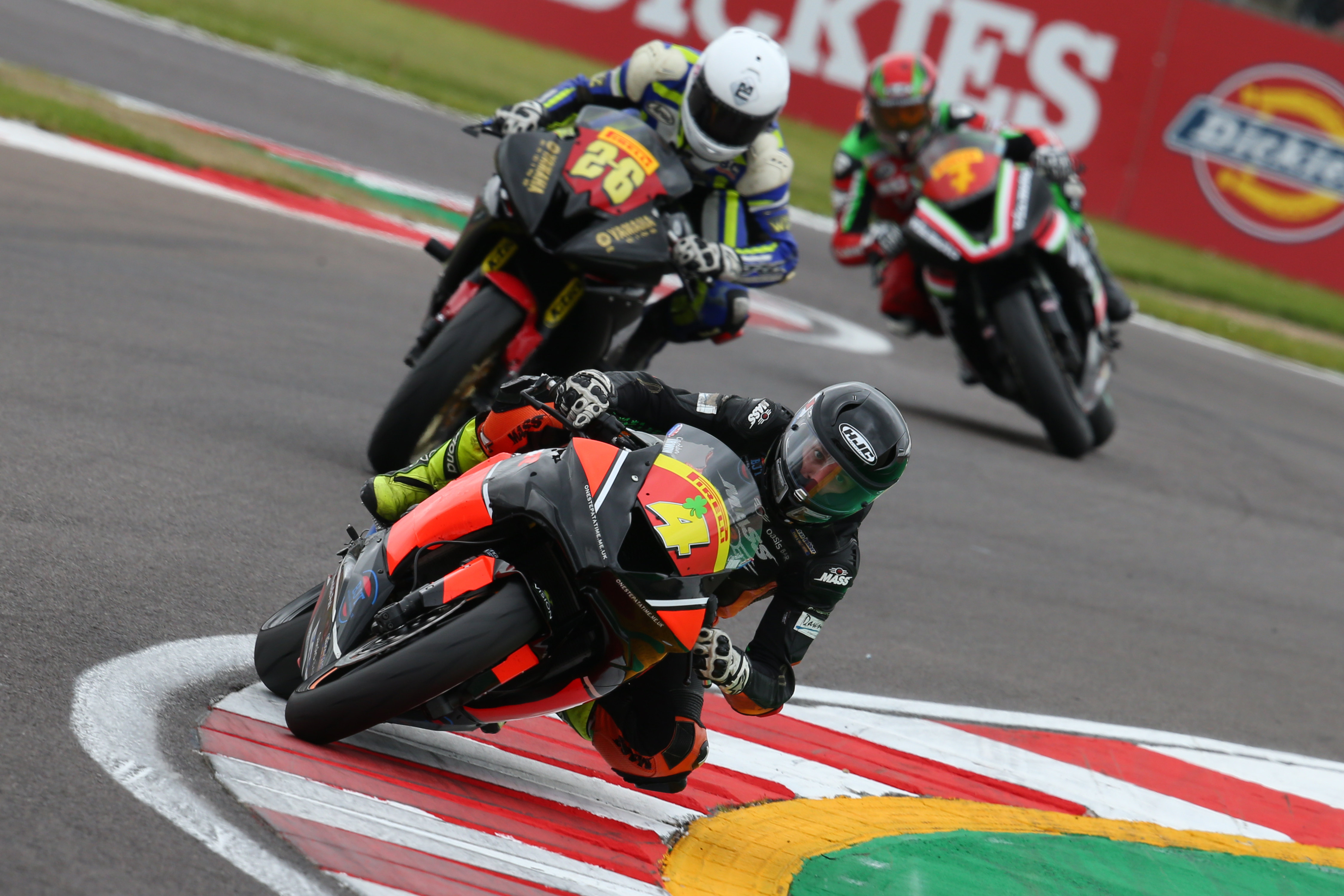 Rhys and Caolán Irwin from Kilmacrennan, County Donegal, both took very positive results away from the third round of the British Superbike Championship at Donington Park on Saturday and Sunday last (May 25th & 26th), as they both achieved their best results of the season.

Younger brother Rhys put in his best British Talent Cup performance so far, to take fourth place in Saturday’s race one, having battled in the lead group throughout the race. Racing in Superstock 600 Caolán overcame handling problems in qualifying and a mechanical issue in Sunday’s race, to pick up sixth place.

Qualifying went well for Rhys as he grabbed fifth on the grid, just a tenth of a second off a front row start. In Saturday’s opening race he then got away with the leaders and was in the thick of the action throughout, moving himself into third with six of the twenty four laps left to run. Just as the Kilmacrennan based youngster was about to make his move to the front he was pushed wide by a rival and dropped back to seventh with just three laps to go. An excellent recovery over the remaining laps saw him retake fourth place by the flag to remain third in the championship.

For Sunday’s second race Rhys once again started fifth, but was immediately in trouble as he finished the first lap in tenth place. By the end of lap two he was twelfth and by the mid point of the race was really struggling as his lap times were more than four seconds off the fastest. As the riders headed onto the final lap Rhys was in danger of dropping out of the points completely, as he sat fourteenth, but a last lap incident for the race leaders moved him up to tenth place at the flag, allowing him to rescue fourth in the championship standings. After the race it was discovered that a major problem with Rhys’s front tyre had been at the root of his difficulties and that he had performed remarkably under the circumstances.

While Rhys had two races over the weekend, older brother Caolán would race on Sunday only. Handling difficulties in practice, as the team continue to to get to grips with his Clean Rubber and Oasis Bar backed Kawasaki, left him in a disappointing thirteenth after practice. Changes for qualifying helped him to jump up to seventh place and further changes to the bike overnight saw an improvement to third in the warm up session giving the team confidence for the race.

A steady start to Sunday’s race put Caolán in eight place at the end of lap one, but he then began a series of very fast and consistent laps which saw him close the gap to the leaders, while gradually moving up to fifth. In the closing stages, while still in touch with the lead group, Caolán was reeling in the fourth placed rider when an issue developed with his steering damper. Unable to maintain his pace the Donegal native somehow managed to hold on for sixth place, and his first points of the season.

Speaking after the race the two Irwin Racing riders had mixed feelings about the weekend. “It was a tough weekend” said Rhys after race two. “Going from almost winning Saturday’s race to fading away on Sunday was tough to take but I had to keep my head down and make the best of the situation. In the end Saturday’s fourth place, and sticking with the bike on Sunday despite the difficulties, has kept me in the championship hunt and I will use the disappointment of Sunday’s race to fire me up for the next one, at Snetterton in July.”

Caolán Irwin said of his weekend. “While I was a bit deflated when I reached the end of the race, looking back on it now its been a great weekend as we have made so much progress with the bike. The R4R Team were brilliant and they listened to me when I said something was not right. Together we got to the bottom of it and I had great pace by the time we came to the race. Despite my mechanical issue we’ve now got points on the board and a good base setting to go to Brands Hatch with.”

The Irwin brothers will be back in action at Brands Hatch in two weeks time with Rhys returning to the Moto3 Standard Class and Caolán continuing in Superstock 600.