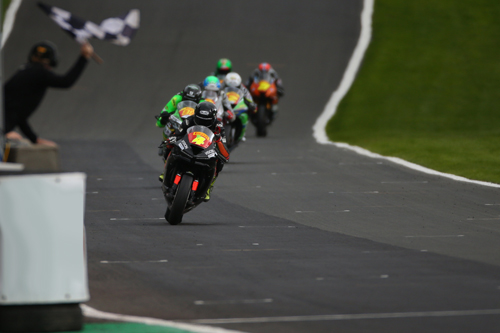 Donegal Motorcycle Racer Caolán Irwin took a fantastic first British Championship win when he raced to victory at round nine of the British Superstock 600 Championship at Cadwell Park today (Sunday August 18th). The win takes the twenty one year old up to fifth in the championship standings and puts him right into contention for the British title with four races remaining.

Irwin is in his second season in the British Championship and has been building towards this victory over the last half dozen races. Having taken two previous podiums, both third place finishes, and run at the front at each event, he finally achieved his first win at a British Superbike Championship event following a calculated last lap pass.

Having been up at the top of the time sheets in first practice, Caolán was confident enough in the set up of his bike to sit out most of the second practice session, once the track became damp. Returning to the track for Saturday’s qualifying he was immediately back up to speed and by half way was quickest. As the pace of the session picked up Caolán kept himself in top spot with another quick lap, but was just beaten to pole position as the session ended, leaving him in second, his best qualifying position of the season

Sunday’s race took three attempts to run following one red flag due to a crash and another when rain began to fall. At the third attempt Caolán and the pole sitter got away from the field with the Irish rider leading. On lap three the positions were reversed but the Kilmacrennan man calmly decided to bide his time and wait till the later stages to push to the front. As the riders entered the final sector of the last lap, Caolán made his move and then held on to take his maiden win by more than half a second.

Speaking after the race the delighted winner said, “I’m so happy, this has been a long time coming after the tough start to the season that we had with the new bike. It a was difficult race with the red flags and the changing conditions, but the bike has been so good for the last few races that I was confident that I could do it. After I was passed on lap three I decided to just follow the leader and worked out that if I could get by before the chicane on the final lap that he would never catch me, and luckily I was able to pull the move off. I have to thank everyone who has helped to get me here, both in the past and present. Including my team Ready 4 Racing, Wesley of Clean Rubber, Galfee, Vision CPS, PCRS Bikesport and of course my family. Now I can’t wait for the double header at Oulton Park in two weeks time so that I can keep pushing towards the top of the championship standings.”

Caolán Irwin will be back in British Superstock 600 championship action at Oulton Park on September 6th, 7th and 8th, where the championship will have its first double header of the season.