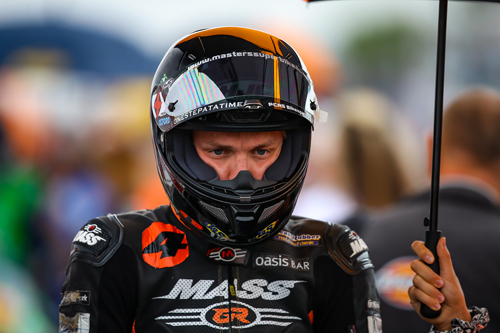 The 2019 Masters Superbike Championship Young Motorcycle Racer of the Year, Caolán Irwin, completed his season at Brands Hatch this weekend, October 18th to 20th. Racing in the British Superstock 600 championship the Donegal racer ran at the front throughout the weekend but was unlucky not to finish as a small error saw him crash out while challenging in the leading pack.

Having had to completely rebuild his Kawasaki following a major accident at Donington Park two weeks ago, where he was hit by the out of control machine of another rider, Caolán arrived at the season finale expecting a tough weekend. His team however did a fantastic job to get the bike back into shape and he was immediately running at the front as he topped the times in practice. Continuing to be quick across every session the Kilmacrennan resident qualified third and was looking forward to a strong finish to the season.

A hectic start to Sunday’s race saw the Irish rider knocked back down the order, but he was soon back up on the tail of the leading group. Over the next couple of laps he worked his way up as high as fifth but his hard work would come to nought as a small error, with five laps to go, saw him crash out to bring a disappointing end to the season.

Having made a late decision to swap to a new Kawasaki, Caolán took the first two British Championship races to get up to speed but made fantastic progress after that. A trip home to Mondello Park helped his progress enormously, as the Young Racer winner took his first ever Irish Supersport win, quickly followed by two more, as he dominated the opening weekend of the Masters Championship.

By the third British event Caolán had progressed to taking his first points finish and he continued his rise to the top as he stepped up onto the podium with third place at the next event. Following a fourth place at Round six, where he missed the top three by less than a tenth of a second, Caolán made it back to the podium by round seven. At Cadwell Park two weeks later, even better was to come, as the Kilmacrennan resident took his first win at a British Superbike event with a hard fought maiden Superstock 600 win.

Speaking about his 2019 highlights Caolán said, “We made a late decision to change to the Kawasaki and went with a new team, Ready 4 Racing, so we expected the first couple of races to be tough. After that however, we did not expect to make such quick progress and I was delighted to be on the podium so early in the season. From then on we were always at the front of every session and I had a string of great runs culminating in the highlight of the year, the win at Cadwell.

The feeling on the slowing down lap after taking the win is one I’ll never forget. I just can’t put it into words how much it meant to me to win a race on a stage as big as the British Superbike Championship. If anyone had told me I’d be there such a short time after winning the Young Racer award I’d don’t think I’d have believed them. Winning the award and all of the help it gave me made such a difference and I don’t think I’d have had such a great season without it. The Cadwell win was just one of many highlights, along with the Mondello hat-trick, and I’d like to thank everyone who made it all possible.

We start now on 2020 and I have a number of options. I’ll be taking some time to make the decision on where I go from here but my aim is to go back to the Superstock 600 class next season and win it.”