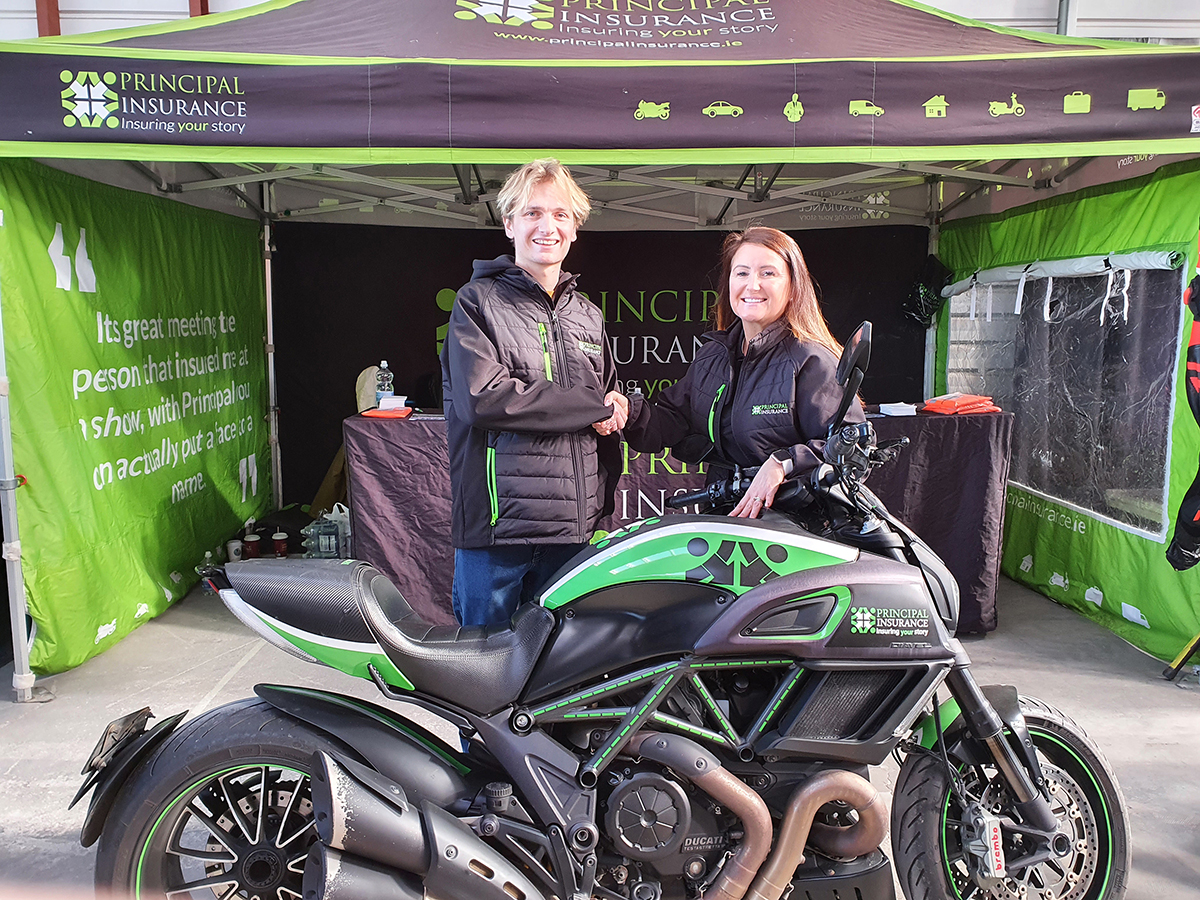 Donegal Motorcycle Racer Caolán Irwin and leading Irish Motorcycle Insurance provider Principal Insurance, have announced the continuation of their successful partnership as Caolán graduates to the British Supersport Championship for 2022.

The former Junior Superstock race winner will continue with his 2021 team, R&R Racing, as he tackles a full season in the British Superbike Championship feeder class, with increased backing form Principal Insurance Ireland. Principal Insurance currently insures a large proportion of Ireland’s road motorcyclists as well as offering Car, Van and Home insurance to its customers and is proud to be a major supporter of Irish Motorcycle Racing, through their backing of Caolán, sponsorship of the Twins class at the Masters Superbike Championship and support of Irish Road Race events.

The 2022 season will see Principal taking increased representation on Caolán’s bike, leathers and helmet as he tackles the competitive British Championship on a brand new R&R Racing Yamaha R6. Having joined the team in 2021 the young Irish rider is looking forward to working with them once again as both team and rider tackle a debut season in Supersport.

As part of his partnership with Principal, Caolán’s progress through the season will be documented in his Principal Insurance video diary, which will go out on his and his sponsors’ social media channels, before during and after his race events.

Speaking at the announcement of his 2022 season Caolán said “It’s great to finally be able to formally announce my plans for 2022 and even better to be setting out on the new season with continued support from Aly and all of the staff at Principal. I’m looking forward to what will be a big step up for me and the team in 2022, with a lot of new challenges, and I cant wait to bring my supporters all of the news through my video diaries. Continuing with R&R is a big boost for me as it will be the first time I’ve been with the same team two seasons in a row. We’ll be running brand new Supersport machinery and while we still have a lot to learn we’re expecting to make quick progress towards the front of the field as the season progresses.”

Principal Insurance Ireland Chief Executive Officer Aly Dixon was also happy to continue to support the young Irish star, “We’ve been behind Caolán for a few seasons now and delighted to see him progressing into Supersport. We realise that this is a big step up for him, in a number of ways, so we are increasing our backing for 2022. Caolán always does a great job for us and really represents us well both on and off track and he is really deserving of support. The British Supersport Championship has a massive following in Ireland due to the large number of Irish riders competing in it, so its great for us to be involved with a rider who can compete at such a high level in the series.”

Caolán Irwin’s 2022 campaign gets underway with the first official BSB test this coming weekend, ahead of the season opener at Silverstone on April 16th. Caolán’s progress through the season can be followed on his and Principal’s social media channels.